skip to main | skip to sidebar

- You wrote the book "How to Pleasurably Stop Smoking". Is art a good addiction for you?

Good question. The notion of addiction that seems truest to me is that an addiction is behavior that the addict feels compelled to continue even in the face of terrible consequences. According to this definition of addiction, which I've read in the work of people such as Dr. Gabor Maté (In the Realm of Hungry Ghosts), addiction doesn't require a drug, a substance. People can be addicted to gambling, for instance. They continue even in the face of terrible consequences. They can't stop until somebody stops them. I've often encountered the idea that artists must have no choice about whether they continue with their art; according to this idea, they should not be able to stop being artists--for them to be genuine artists. Just as one can't stop breathing.

But not too many people would say that we're addicted to breathing. If you want to retain the idea that an addiction is harmful, then you probably won't agree that we're addicted to breathing. Because breathing is not harmful. Unless one is in a very bad way, such as with terrible, incurable lung problems, where each breath is torture--but also life-sustaining. I think of addiction like Maté does, and as a harmful thing. But I also think of it as something that strong illusions sustain. Strong illusions that, once dispelled, essentially free us from the compulsive behavior. Addiction may have a physical component, as in the case of alcohol, tobacco, heroin, cocaine, etc. But in addictions, we think we need it more than we do. We think we need it for things that it doesn't actually supply. Getting over illusions is the main obstacle to getting over an addiction. Dispelling the illusions that sustain an addiction kill it like understanding how a magic trick works. Once you understand how a magic trick works, you just can't be fooled by it anymore. Similarly, once you understand that the addiction isn't giving you the wonderful things you think it gives you, you are cured of craving the object of the addiction.

But I haven't answered your question. Certainly art can be an addiction. One can do art rather than deal with what one needs to deal with. And then fool oneself into thinking that one's art is so important that one must indeed neglect everything else. That's thinking like an addict. Thinking like an artist might be different than that. There's a love of truth in art. Art is a way of finding our way to the truth. Not hiding from it. There's pretending in art. But it's pretending toward the truth, in strong art. There's that old idea that fiction is truer than life, more real than life. That means it's toward finding and dealing with the truth, not hiding from it. Art deals with the truth and the beauty in the truth, even when the truth is ugly. Or that is the aspiration of art. The love of truth that is fundamental to strong art counter-balances the nature of art as illusion, creating truth as presented in or represented in illusions. Which, when you think about it, is necessarily the way we represent ideas, because ideas are not like stones and chairs--they must be invoked as ideas that remain invisible, not worldly things. Art entangles us in illusion but it also aspires to truth.

Like other things to which one can be addicted, art can be a harmful addiction in which one desperately depends on illusions that eventually destroy us. But, unlike so many other things that can be addictive, there is this countervailing aspiration in strong art to truth and its pursuit, its acknowledgement, its value. In story. In image. In song and dance.

So, while art can be an addiction--which I interpret as necessarily harmful--it can also be something else, something positive, something infused with the life force, with the power and necessity of breath, prana, and truth. I think we all are aware of both of these in our experience as artists. Continually.

Thanks for the great question which made me think about addiction vs art, Piotr.

- Are poets similar to computers (which - as you wrote - are language machines)?

That question would raise the hair of quite a few people. Especially many poets. It's provocative. The idea that poets are like computers would would often encounter the response that, no, they are the opposite--poets are alive, are the quintessence of humanity, of life, of liveliness. I think it's important to understand that while, yes, poetry is indeed toward that vitality, that liveliness, that utter humanity, computers are not simply the quintessence of the opposite, of the robotic, the zombified, the spiritless, the deadened. While we do encounter that--a lot--in our experience of computing, many of us have to be creative with computers. That's our job, or part of our job. The job we get paid for and/or the job we see ourselves doing in life. It's important that we be able to be creative and thoughtful--and fully alive--even beyond what we would normally be capable of--in our use of computers. We need it. The world needs it. Marshall McLuhan saw technology as extensions of the body and mind. The telescope as an extension of the eye. The telephone as an extension of our ears and voices. The car as an extension of our legs. Computers as extensions of our memory and cognitive abilities (among other things). We need to be able to bring our full creativity and humanity to our use of computers, or these extensions of ourselves are merely nasty claws that hurt people rather than instruments of our vision and compassion.

Yes, they can. Although most programming mistakes result in the program not running at all. And most of the programming mistakes that don't kill the program aren't all that interesting. But occasionally, yes. As in evolutionary change. In some types of art, the unexpected is very unlikely to be welcome or fecund. In more adventurous, less fully played-out art, there is room for the unexpected. In the work I do that I get excited about, there's usually lots of room for the unexpected and at least as much room occupied by the unknown. When I don't really know if it's going to turn out well at all, that's exciting and might indicate we're on relatively new territory. Someone said that it isn't experimental if you know the outcome before the experiment is finished. In a related vein, Bachelard said “If one doesn’t put one’s reason at stake in an experiment,” in Le Surrationalisme (1936), “the experiment is not worth attempting.”

- What forms of publication/presentation fit your works best?

I've been publishing almost all of my stuff on the net since 1996. So I try to create art that works well there. But the last couple of years, I've also published a couple of books. And I try to make that stuff work in print as well as my other stuff works on the net. I'd like to develop a version of Aleph Null that would do well in a gallery (via 'gallery mode'). I think if you put your mind to thinking about the special properties of the media/um you're working in, and attending to all the dimensions of the art, it should work OK in any medium. I'm going to see if I can develop some good prints of some of my collaboration with bill bissett.

- How important is rhythm in your creations?

- How to use changes in a piece of art or in a poem? What do you think about adding something to older works?

That's one of the possibilities of web-published work on your own site. I've done that. I added new parts to the Nio project, for instance, years after the original project was finished. Also, I added new stir fry texts to the Stir Fry Texts. The Stir Fry project is ongoing. I think adding new parts to old projects can strengthen them.

- Poets said that my works are comics, but comic artists said it's poetry. Not being accepted, I started creating "poemics". Do you ever feel that your creations "don't fit"?

I've found your poemics of use and of value to me. Just thinking about Aleph Null in terms of poemics or comics has been useful. For instance, thinking of this slideshow as poemic: http://vispo.com/aleph3/images/bill_bissett/slidvid13 . This is from my collaboration with bill bissett. In this slideshow, the 'panels' are circular. Each circle is a 'panel', sort of. I've been thinking of a book of these, where I add 'captions' of some sort. In comics, as you know, 'captions' are pretty much any text that is in the gutter or in thought balloons, or at the top of the panel, as happens in comics. The captions would contain a story of bill bissett's life, perhaps.

Here's another one to think of in terms of poemics: http://vispo.com/aleph3/images/jim_andrews/alchemy/slidvid6 . Think of each circle, again, as a panel. This slideshow is of Aleph Null chewing on public images concerned with alchemy and cosmography.

Much of my work is some kind of hybrid. Something crossed with something else. Innovation is one of my main passions. Trying to do things that haven't been done before. So, of course, even when, as art, as poetry, it's strong--which isn't all the time--it often doesn't fit in very well to what has already been done. That's part of the consequence of trying to create relatively innovative work. It comes with the territory. There's some pain involved in one's work not fitting in well. Some rejection. Some resistance. Some resentment. But there's also the thrill of really fresh and strong art. That thrill, that joy, that achievement, that totally surprising experience of beauty, of the literary, of the interactive, of visual art, of audio art--that never-the-same-twice experience of terrific generative art--that is a rewarding countervailing motivation against the negative aspects of not fitting in.

I'm not sure what sort of difference(s) you're thinking of between 'poemics' and 'neopoemics'.

Another idea I've thought could be good, in a certain sense, is to use panels as a way to present my slideshows of images. I have maybe close to a hundred slideshows of images, each of which is quite unified. I need a way to present all those slideshows in one interface in a compelling way. You can see that http://vispo.com/aleph3/images/bill_bissett is a better way to present a bunch of slideshows than is http://vispo.com/dbcinema . But they're both still not optimal. So, instead, imagine a page that looks like a page of comics. You see multiple panels, like a page of a comic. And perhaps each of the panels has a caption. And in each panel is a poster image from a slideshow. A big splashy poster image. When you click a panel, that takes you to the slideshow. And when you click the 'back' button, you go back to the poemic. That's using comics/poemics not in the most creative way, but as a frame, really, for presenting slideshows of images. But as a really good frame, I think.

- I think that Canada is an empire of visual poetry. Do you think neopoemics could be interesting for Canadian visual artists? 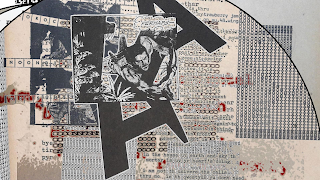 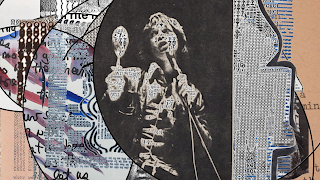 From http://vispo.com/aleph3/images/bill_bissett/slidvid14/index.htm?n=38 , a collaboration between Jim Andrews and bill bissett. bill is pictured above (1960s). 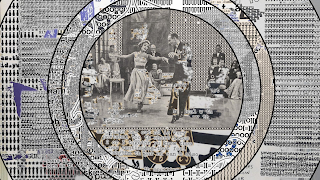 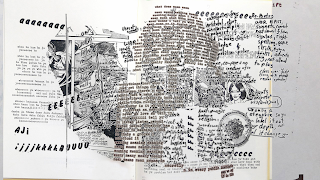 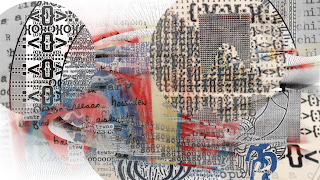 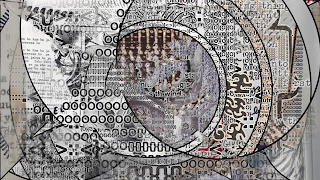 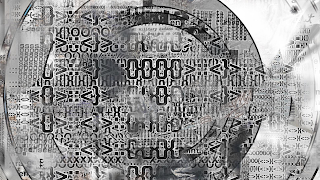